Explain with neat sketch construction and working of ice plant.

Explain with neat sketch construction and working of ice plant.

Working of Ice plant: The main cycle used for ice plant is vapor compression cycle with ammonia as the refrigerant in primary circuit and brine solution in secondary circuit. Brine solution takes heat from water in secondary circuit and delivers the heat to ammonia in primary circuit. Thus, the indirect method of cooling is used in ice plant. In secondary circuit brine is cooled in evaporator and then it is circulated around the can which contains water. The heat is extracted from the water in the can and is given to the brine. The brine is contentiously circulated around the can with the help of brine pump till entire water in the can is converted into ice at -6 0 C. Ammonia vapor coming out of evaporator is compressed to high pressure and then these vapors are condensed in the condenser. High pressure liquid ammonia is collected in the receiver and it is passed through the expansion valve to reduce its pressure and temperature as per requirement. The throttle liquid ammonia at low temperature & low pressure enters in evaporator, which are the coils dipped in brine tank. The liquid ammonia absorbs heat from brine and gets converted into vapors, which are drawn by suction line of compressor. 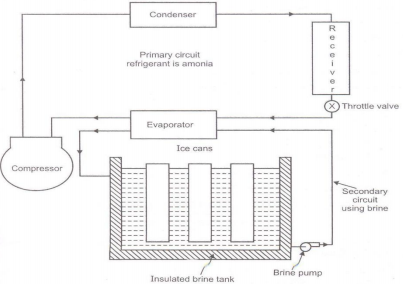