Explain the working of ‘Turbo-Prop’ engine with neat sketch.

The main components of turbo-prop engine are a propeller, gear reduction unit, a compressor, a combustor, gas turbine and the nozzles. In this engine 80 to 90% of the total propulsive thrust is generated by the gas turbine and the remainder is developed by the expansion of the gases in nozzles. Due to this the power generated in the gas turbine is used for driving the compressor and the propeller, while in case of turbojet engines the turbine power is only used to drive the compressor and the auxiliaries. The gas turbine drives the propeller through the reduction gear unit and it draws a large amount of air. A large part of this air drawn by the propeller is passed through the ducts around the engine and the remainder is compressed in the diffuser by ram compression and further in the compressor. Fuel is burnt in the combustor and the resultant high temperature gases are expanded in the turbine and finally in the nozzles. The total thrust developed is the sum of thrust developed by the propeller and the nozzle. Unlike the turbojet engines the turboprop engines are widely used for commercial and military air crafts, due to their low specific fuel consumption and high flexibility of operation at reasonably high speed. 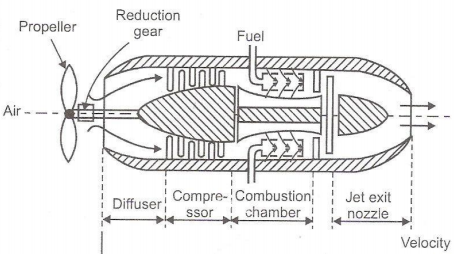